The Guardian Brain Foundation recently celebrated its third annual Butterfly Ball at the Carltun. The perfect mix of fun and elegance made the evening a success. Arjay Lewis from Arjay Lewis Productions captured the guest’s attention by donning his mask and cape and greeting all entering the cocktail room by singing the Phantom of the Opera. Father Tom Hartman, of the GOD Squad and Father Thomas Hartman Parkinson’s Foundation, welcomed everyone with his warm smile and gave a heartfelt benediction to all. 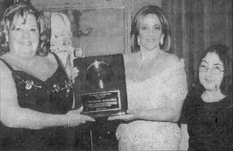 Spencer Shea, son of Catherine Shea, toasted all and named a new program “Celebration of Life Award” in his mother’s memory. Catherine Shea lost her battle to a cancerous brain tumor. This award will he given to an individual who demonstrates optimism in times of adversity, foresight and hope in times of despair, courage in times of weakness and most importantly celebrates tile spirit of life.

Mary Pallotta, founder and president of the Guardian Brain Foundation. welcomed everyone and shared the memory of her brother Dennis who lost a three month battle to brain cancer six years ago and tragically lost her father to CJD Sporadic this past year.

She explained that each year over 100,000 people are diagnosed with a brain tumor. 3.5 million Americans are living with a disability as a result of a traumatic brain injury. One in every million will he diagnosed with CJD Sporadic.

She explained how her world was suddenly turned upside down, and how fragile it is. Mary reminded us all that life is about choices and thanked everyone forchoosing to make a difference. Mary urged all not to overlook life’s lessons and to take nothing for granted. There is no greater gift than touching the lives of others.

Long Island philanthropist Agnes Trill Funk was our honoree. Her dedication, support, and devotion has helped so many. Agnes lit up the event with butterfly lights displayed as the centerpieces. They were auctioned off at the end of the evening. 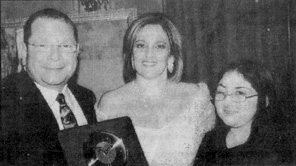 Comedian Joey Kola was the Golden Guardian. Laughter was contagious as he grasped the audience and made the Butterfly Ball become a memorable evening. Michael Pallotta Jr. produced and directed a video of Joey Kola.

Michael Pallotta announced The Guardian Brain Foundation’s new Program Director Robert Crescenzo, and programs for the up coming year. A special tribute was made to tile many that have lost their battle to brain cancer, tumors and in Awards were given to Catherine Montero. development director and executive secretary and Joseph Lewy, our web designer and webmaster. The awards had a built-in clock. thanking them for taking the time to help make a difference.

A very special thank you to Jennifer Pulgrano for helping us give out the awards. Ms. Pulorano had an astriosytoma brain tumor. She has shown courage strength and support to The Guardian Brain Foundation and so many. Jennifer is a true Guardian who is an inspiration to all.

Kayo from Glyde Productions showed a wonderful montage that he created of The Guardian Brain Foundation events from the past year.

Last year’s winner, D. Shapiro, will be featured in a book being released later this month.

A special thank you to Edible Arrangements of Wantagh for adorning each and every table with not only beautiful, hut delicious centerpiece dessert baskets.

The Guardian Brain Foundation would like to thank everyone for joining in its mission. With your dedication and support we will continue to make a difference.

Prior to joining Cedars-Sinai, Dr. Black served on the University of California, Los Angeles faculty for 10 years where he was Professor of Neurosurgery. In 1992 he was awarded the Ruth and Raymond Stotter Chair in the Department of Surgery and was Head of the UCLA Comprehensive Brain Tumor Program.

Dr. Black pioneered research on designing ways to open the blood-brain barrier, enabling chemotherapeutic drugs to be delivered directly into the tumor. His work in this field received the Jacob Javits award from the National Advisory Neurological Disorders and Stroke Council of the National Institutes of Health in June of 2000. Dr. Black and patients undergoing the first clinical trials of the drug, RMP-7, were profiled in 1996 on the PBS program, “The New Explorers,” in an episode called “Outsmarting the Brain.” Dr. Black’s other groundbreaking research has focused on developing a vaccine to enhance the body’s immune response to brain tumors, use of gene arrays to develop molecular profiles of tumors, the use of optical technology for brain mapping, and the use of focused microwave energy to non-invasively destroy brain tumors. He was featured on the cover of Time magazine in the Fall 1997 special edition of “Heroes in Medicine.”

Dr. Black has a unique ability to combine cutting-edge research and an extremely busy surgical practice. Since 1987, he has performed more than 3,000 operations for resection of brain tumors.

Dr. Black has had a keen interest in science since childhood. At age 17, he published his first scientific paper, which earned the Westinghouse Science Award. He completed an accelerated college program at the University of Michigan and earned both his undergraduate and medical degrees in six years. He completed his internship in general surgery and residency in neurological surgery at the University of Michigan Medical Center in Ann Arbor.

Isabelle Germano, MD
Dr. Germano is Director of the Mount Sinai Medical Center Stereotactic & Functional Neurosurgery Program, an advanced multidisciplinary program based on computer-assisted image-guided neurosurgery to accomplish minimally invasive procedures.  She is also Co-director of the Brain Tumor Program in the Department of Neurosurgery, a multidisciplinary program focused on surgery and adjuvant treatment of brain tumors.  Dr. Germano is one of the pioneers of computer-assisted image-guided neurosurgery.  This sophisticated technology is used to perform minimally invasive surgery for patients with brain tumors, epilepsy, Parkinson’s disease, and movement disorder surgery.
Robert A. Crescenzo, MS, CSW, ACSW

Chairman of the Medical Department – Internist/17th Year in NFL

Elliot Pellman joined the New York Jets medical staff in 1988 and in 1998 was named the chairman of the Medical Department.  In his current capacity, Dr. Pellman is responsible for the direction, supervision and operations of the entire Jets’ medical department.  He also serves the Jets’ staff as the team internist. Dr. Pellman is the NFL medical liaison and is a past president of the NFL Physician’s Society.  He is the chairman of the NFL subcommittee on Mild Traumatic Brain Injury, a member of the NFL Injury and Safety Panel and is a member of the NFL/NFLPA Player Safety Committee.